Meet Favorite Maker Michelle Warner! We met years ago working in theatre and we both moved to New York on career-changing adventures. Michelle recently launched By Hand Culinary, where she teaches cooking classes (sometimes combined with educational farm tours at Kinderhook Farm) and curates unique food events. She changed careers just before I did and I remember being inspired by the fearlessness and wholeheartedness of her transition. Knowing the challenges that come with starting your own business, I’m even more inspired by her perseverance and dedication to her vision. Michelle Warner makes really good food.

We met up at the Beach 97 Street Concessions, where Michelle is the Operations and Events Manager during the summer. I started by asking her what inspired her change careers.

I worked in theatre from age of 6, so by the time I was 28 I felt like I had a full career and had sucked what I wanted out of that. My last set decorating job was at the Oprah Winfrey Show. It was a special experience and felt like I was part of something in a large and impactful, but it still wasn’t right for me. At the Oprah Winfrey Show we did a lot of cooking segments and I was really interested in those. When we had a celebrity chef on the show I saw there was a team of people behind them. I'm not someone who's looking for their own cooking show, but I knew from theatre design I loved curating and creating an experience, so to be the support and structure around a celebrity food brand appealed to me. I did some exploratory interviews [with people in the industry] to learn more about it.

Who did you reach out to?

I reached out to Anthony Hoy Fong who was Tyler Florence's culinary producer. I have an embarrassing story about realizing Tyler Florence was coming to Chicago to sample his new line of baby food at Whole Foods and using that as a way to talk to Anthony. I was like, alright, Anthony is probably going to be there so I'm going to go shopping and just run into him. So I did! And got his number and connected with him and he was really supportive of my interests. And if I wasn't just like, alright, let's just be weird about this and pretend to run into him accidentally and be like "Oh hi! It's so weird you're here getting grapefruit" I wouldn’t have met him! He told me to go to culinary school if I wanted to be a culinary show producer. So I went to culinary school and got an interview at the Food Network test kitchens for an externship. I was so scared at the interview, it takes 6 hours. But it worked out and I got it. I missed teaching though–before enrolling in culinary school I took recreational classes and was a class assistant at a place called the Chopping Block in Chicago. So to get some teaching in I reached out to The Brooklyn Kitchen, which is a housewares store with a little green grocer and 2 kitchens. I took the lead in their teaching kitchen and said okay, let's develop a plan, menus and a way we hire and staff. I formalized what they were doing. 
I want to pause on this journey because it sounds like it was very natural and one thing led into another but I want to know about some of the challenges too.

The darker sides of it!

Yeah, because everybody's journey has them and they're important to share. Some people are duped into thinking it should be smooth sailing, but we learn so much from those challenges.

Well, I also had like 3 years where I was miserable and crying myself awake at night because I was so unhappy working in theatre!

I had a particularly dark moment while working with [The Willary’s Co-Founder] Chelsea. We worked all night on some terrible chandeliers for an opera. I barely slept and I just thought, I'm in a place where I'm getting paid well, I'm working with another really great creative person and still, I want to run away. We were successful at what we were doing. We worked with awesome people, I'm just going to include you in this, you did amazing things but sometimes it doesn't matter if you're good at your job if it's not what you want to do. And I was like, I just keep getting better jobs and better offers and I still don't want to go find silver tea trays for some show. So there's plenty of those [harsh stories] and they are important to hear as you look for your next direction. And when you start a new journey, talk to people and try things that you don't know to see if they'll work. Like I did a 2 week unpaid internship at Steppenwolf Theatre in graphic design. It's just–you're never going to get anywhere just sitting in your room waiting for life to happen.

You sound especially unafraid to approach people and put yourself in these situations.

Some of those decisions were hard. At The Oprah Winfrey Show–I was definitely at a high level of what I was doing–but I would come home and be like, I just need to make a roast. And think about making it and learn about it. It’s a different feeling than just wanting a hobby. You know I sew, I make things for myself to wear, but I’m never going to have an etsy shop. I just know when I need some time to let my brain spin in a different direction I’m going to craft. But I've been cooking my whole life. I did a backpacking trip through Europe when I was 18 and my travelogues are all about what I ate, what I think it was made out of and how I think I could recreate it at home. My whole world was always about cooking.

And what a neat thing too, to start a business where you get to be creative too.

Yeah. I have a BS in Scenic Design. And at The Brooklyn Kitchen the staff, the retail buyers, all of those people had art degrees. But our lives were translated into food pretty easily and somehow we all found each other. It was nice working in that environment because everyone was such a creative thinker.

I’ve been doing some of that stuff for a while. I managed the prop shop in college. I had students who weren’t fine art majors who had to work in a theatre shop [for credit]. I would find them and say, “Hey, come make fake rocks with me. You got 5 hours a week? I’ll see you once a week for 30 minutes and we will make something and you’ll have ownership of something.” Because I like that. I like to start something and see the end of it. Like in theatre, ultimately the show is going to open, then you move on to the next show. The same with cooking, it’s like, alright, I’m feeding 25 people and the ovens aren’t working but still ultimately people are going to eat and people are going to go home. This isn’t forever. That satisfies me.

Where do you find your inspiration? Chefs? Restaurants?

For By Hand Culinary I do farm to table farm tours with an educational component. And whenever I’m crafting a recipe to teach it comes from an interest in an ingredient. I was obsessed with einkorn last winter, it’s an ancient grain, the first cultivated grain. Grass is grain, it’s wheat essentially, and einkorn is a grass that had a strong berry so when people stopped moving around as much they started planting it then drying the berries and grinding it, making crackers and what not. It’s got an interesting flavor that I really like. And I think gluten intolerance and allergies are interesting enough to pursue other grains so I started playing a lot. I got really into making sour dough, breads and crackers with it. You can also take those berries and make them like you would a barley or a farro and make it into a rice. There are also certain, vegetable-focused cookbooks I use for inspiration. For my cooking I find a protein is best kept simple and the detail is in the vegetables. I also love Southern food and soul food. Michelle's Fried Chicken on the Farm. Her recipe can be yours by backing our Kickstarter campaign! Photo credit: Mike Vorrasi of vorassi.com


Do you cook differently at home than you do at work?

That’s hard because I’m teaching home cooks. I’m rarely going to make fresh pasta at home, but I will teach it til the cows come home. On the farm tours I we make fried chicken and I definitely don’t make fried chicken at home because it’s such an undertaking. But it’s so much about the experience of it. In my perfect life, I would have a cooking school and do culinary tours, something where we’re all together learning and getting excited about things.

It gets back to theatre, it’s about the experience. Getting people together in a room and sharing this thing, this experience with them, seeing what they bring to it, how you can guide it.

Yeah, it’s the only way I can be in front of an audience. Because I could never read a script and perform as a character. But if I’m in front of a cooking class sometimes I’m like, man, I have to reign it in on the jokes, I just feed off the positive energy and it’s really fun.

You are so confident and so matter of fact and know what you want to do. Is there an example of something that’s really pushed you out of your comfort zone though?

Absolutely. Selling farm tours or tickets to classes is hard. I need to sell myself more and I’m not great at that.

Just getting butts in seats and being brave enough. I passed out postcards in Park Slope, good old fashioned shoe leather stuff. And people were positive. But it reminds me of when I volunteered for the American Cancer Society in college and how hard it was to get people to donate or volunteer. And I was fighting to stop the number one cause of death! Like who doesn’t want to stop cancer? And even that was really hard. But now I’m selling a product. What I’m currently working through is I am a product that has value that should be sold. I’m learning also how to ask for help. Figuring out how--what I need help with and how to ask people who could help. But it’s good to be hands on too, because when I was handing out postcards, talking about something I believe in, it got my brain going. I started thinking about how else can I get the word out? And talking to people, you’ve just got to keep talking to people. This winter was so weird because I was building the website and people couldn’t even sign up for classes but I was like really, I swear I have value! I always describe it as standing at the bottom of a well yelling up, like “Hello! I am providing something, come here! Hello!” And people are like, yeah, there’s a lot going on up here.

Well, one of the reasons behind these interviews is to hype our community... 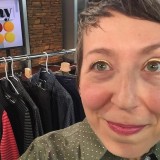 Also in The Willary Blog In the spirit of ease, 3 holiday gifts from The Willary that are an easy fit and a thoughtful upgrade to your favorite gal's wardrobe. Order by Tuesday 12/17 to receive your order by 12/24.

What's in a name? The Willary Blazer The Willary Blazer so perfectly embodies what The Willary is all about that I couldn’t imagine calling it anything else.

Sign up to get the latest on sales, new releases and more…